In 1831, “An Act to Provide for Sick and Disabled Seamen” was passed by the New York State Legislature.  A tract of farmland was acquired for the purpose, and by 1837, a proper hospital was constructed, funded by a head-tax imposed on sailors entering the Port of New York. The intention was admirable and the structure was impressive. Looking at the distinctively 19th-century facade of the old Sailor’s Infirmary today, it’s easy to imagine the place brimming with leathery old salts in their twilight years, regaling each other with adventures at sea that’d put Herman Melville to shame.

In those days, the porticos of the Infirmary offered commanding views of the New York Harbor and the surrounding countryside.  In 1862, the Infirmary’s Chief Physician rhapsodized on the subject: “the weary invalid can breathe the bracing air of the sea…the sight of his chosen element, covered with the white winged messengers of a world-wide commerce that fills his mind with hope and cheer.”

Today, its pastoral surroundings have been swallowed up by development, the “white-winged messengers” have vanished from the harbor, and the halls of the hospital no longer resound with tales of youthful exploits in the exotic port cities of the world.  Instead, a fire alarm near the front door blares interminably, to nobody at all.

Expansive porches provided views of the harbor to ailing seamen.

While the idea of a hospital for sailors might seem odd to the modern observer, there was an urgent need for this sort of specialized care in the 19th century, when sailing was a much more common occupation and working conditions were deplorable.  The Infirmary’s first Chief Physician described the health of a newly admitted patient in 1838 as such: “Arrived last night on brig from round Cape Horn…Has been to sea 118 days and had nothing but indifferent salt food to feed upon…Twenty days after sailing his gums became sore and spongy and bled very freely…Around the small of each leg caked hard and over the instep a deep blue almost black color…Suffered universal pain…Very much prostrated and emaciated and was brought into the (Infirmary)…Had no lime juice on board nor any other antiscorbutic effectual in preventing scurvy…It is in this shameful manner vessels are provided to the destruction of seamen…An object of pity to behold.”

In addition to advocating for better living and working conditions for seamen, the Sailor’s Infirmary made a lasting impact on world health as the birthplace of one of the most formidable biomedical research facilities in the world.  In 1887, a young doctor founded a one-room bacteriological laboratory in the attic of the hospital to investigate epidemics like cholera and yellow fever.  Over the course of the 20th century, his humble “Laboratory of Hygiene” evolved into a federally-funded research initiative that still operates today with an annual budget of $30 billion.  Needless to say, it outgrew the attic long ago.

Researchers at work in the attic’s “Laboratory of Hygiene” (1887) 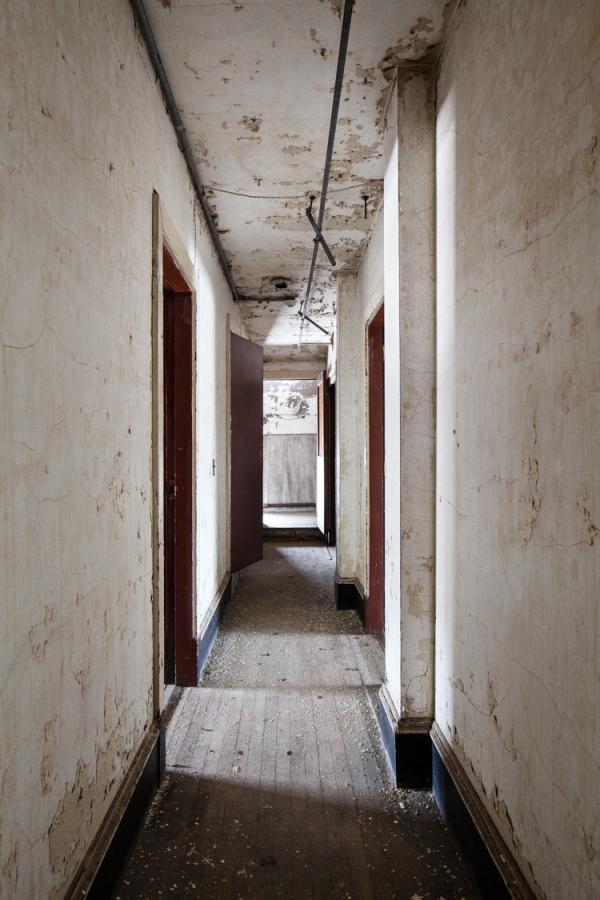 The attic as it appears today.  The area was renovated in 1912.

Over the course of the 20th century the infirmary greatly expanded its services, and the campus grew to include a seven-story hospital and multiple ancillary buildings, dwarfing the original structure in the process.  Under federal ownership, the grounds served military families, veterans, and later the general public.  An organization of the Catholic medical system took over in 1981, and the hospital’s focus pivoted to psychiatric care and addiction rehabilitation.  In recent years, the campus has been racked with financial problems, and its services have been consolidated to a few floors of the main hospital building.  The rest of the complex sits abandoned, facing an uncertain future despite multiple landmark designations.

Like many grand, old buildings, the 1837 Infirmary appears to have been shut down from the top down.  Dental clinics and early childhood programs lingered into the early 2000s on the lower floors, while the top floor sat unused for decades.  Today, the interior is largely empty and plain—drop ceilings and fluorescent lights abound.  But the attic retains a much older patina, and a few odd relics that feel fantastically out of step with the modern trappings below.

(Note: This is one of those rare abandoned buildings that isn’t vandalized beyond all recognition.  In the hopes of keeping it that way I’ve chosen not to disclose its actual name and location, or to identify some key elements of its history.)

Teddy bear wallpaper and faux stained glass in an area used as a preschool. 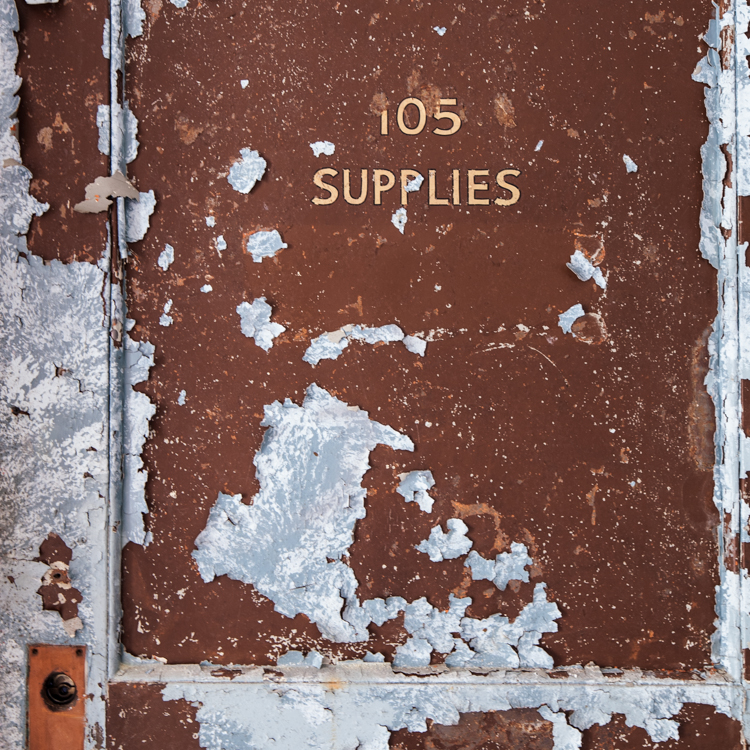 I’m not sure what the artist was going for here.  Abstract rendering of a barn?

A bit of ornamentation was still visible on the stairs.

Upstairs in the attic, a fascinating pedal-operated sewing machine.

Mouldering files in the south wing.

Solid wood wardrobes were far older than furniture on the lower floors. 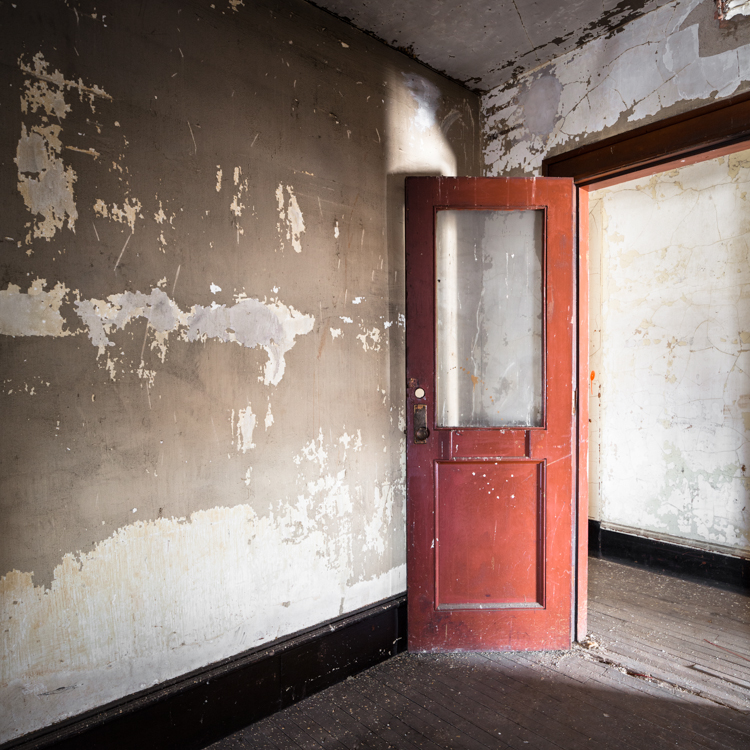 A red door led into a utility room.

Storage spaces in the attic held a number of intriguing artifacts.

Including a set of 1940s dental chairs.

In other news…  I’ve got a new website that just went live.  Head over to www.willellisphoto.com for a look at some of my other photo projects, plus a sampling of  the work I do for a living (shooting non-abandoned architecture and interiors.)  You can also sign up for my newsletter if you’re so inclined, or buy a book.  (They’re 10% OFF with the code “ANYC.”)

19 thoughts on “Navigating the Sailor’s Infirmary”

Today I’m sharing the tragic tale of Typhoid Mary in my stories, an asymptomatic carrier of the disease forced into quarantine on North Brother Island for decades. 🏚 (I’m also hawking my book Abandoned NYC, which turned 5 this year. #shopsmall and pick up a copy through the link in bio!) 📖 Mary is the perfect example of why everyone must do their part to #flattenthecurve. Stay inside people! #abandonednyc #urbanexploration #abandoned #northbrotherisland #abandonedplaces #nychistory #typhoidmary
🦠 Another bit of NYC quarantine history: Tuberculosis was the second leading cause of death in NYC at the turn of the 20th century. In response, Staten Island’s Sea View Hospital opened in 1913, expanding over the years to include the children’s hospital pictured here. 💀 Once an effective antibiotic was developed to combat the scourge, the place emptied out quickly. A 1952 report by the Department of Hospitals read “Euphoria swept Seaview Hospital. Patients consigned to death at the hands of the white plague celebrated a new lease on life by dancing in the halls.” 💉 The hospital was abandoned in 1974, 📸 2015. #abandoned #abandonedplaces #nychistory #urbanexploration #asylum #quarantine #abandonednyc #statenisland #siliver
🦠 A look back at the history of quarantine in NYC—North Brother Island was the site of NYC’s Riverside Hospital from 1885-1945, treating and isolating patients with smallpox, tuberculosis, typhoid fever and other contagious diseases. 😷 It housed military families and adolescent drug addicts for a brief period before being abandoned in the 1960s. 🏚#quarantine #abandonedplaces #urbandecay #urbex #ue #abandoned #abandonednyc
Museo Rufino Tamayo, Oaxaca City. 🇲🇽 #visitmexico #oaxaca #oaxacamexico
Love every element in this detail from Teotitlan’s colonial-era church. ⛪️ #México #mexicotravel #teotitlandelvalle #oaxaca #oaxacatravel #stilllife
Wandering through Portuguese countryside last September... 📷 Taken in a village whose name I can’t remember. #portugal #portugaltravel #alentejo #alentejogram #colorstory #mustard #ochre
Knockout ocean views in this project by Domino Creative, 📸 2018 on Turks and Caicos. #islandstyle #interiordesign #dominocreative #isitsummeryet #interiorphotography
One from the archives, taken September 2015 at Fort Wadsworth, Staten Island. An unexpected view of the Verrazano Bridge from the ruins. 🍃 #siadvance #statenisland #verrazanobridge #nyc #abandoned #ruins
New work for @houseofglue—check them out if you need some fun, affordable art for your space. 🖼 #interiordesign #interiorphotography #tribeca #nycinteriors #wallart #houseofglue
Finally time to share this magical Christmas scene we shot in August w/@coralandtusk. Happy Holidays to you and yours! 🎁🎄#christmastree #merrychristmas #interiorphotography #housebeautiful #bhgholiday #deckthehalls
Views from the hilltop village of Monsaraz. 🌾 #portugal #portugaltravel #portugal_lovers #monsaraz #alentejo #alentejogram
Gloomy winter days always bring me back to “Arthur Kill Rd,” a series I photographed in 2016 depicting forgotten places on Staten Island. 🚢⚓️🏚Here’s the wreck of the Philip T. Feeney in Port Richmond. #statenisland #forgottenplaces #abandonedplaces #abandonednyc #shipwreck #portrichmond #forgottenborough