In 1925, Dr. William Crocker spoke eloquently on the nature of botany: “The dependence of man upon plants is intimate and many sided.  No science is more fundamental to life and more immediately and multifariously practical than plant science.  We have here around us enough unsolved riddles to tax the best scientific genius for centuries to come.”

As the director of the Boyce Thompson Institute in Yonkers, Crocker was charged with leading teams of botanists, chemists, protozoologists, and entomologists in tackling the greatest mysteries of the botanical world, focusing on cures for plant diseases and tactics to increase agricultural yields.  The facility was opened in 1924 as the most well equipped botanical laboratory in the world, with a system of eight greenhouses and indoor facilities for “nature faking”—growing plants in artificial conditions with precise control over light, temperature, humidity, and carbon dioxide levels.

The sun sets on the greenhouses of the Boyce Thompson Institute.

The institution had been founded by Col. William Boyce Thompson, a wealthy mining mogul who became interested in the study of plants after witnessing starvation while being stationed in Russia, (although an alternate history claims he just loved his garden.)  Recognizing the rapid rate of population growth worldwide, he sought to establish a research facility with an eye toward increasing the world’s food supply, “to study why and how plants grow, why they languish or thrive, how their diseases may be conquered and how their development may be stimulated.”

By 1974, the Institute had gained an international reputation for its contributions to plant research, but was beginning to set its sights on a new building.  The location had originally been chosen due to its close proximity to Col. Thompson’s 67-room mansion Alder Manor, but property values had risen sharply as the area became widely developed.  Soaring air pollution in Yonkers enabled several important experiments at the institute, but hindered most.  With a dwindling endowment, the BTI moved to a new location at Cornell University in Ithaca, and continues to dedicate itself to quality research in plant science.

Most of the interiors had a near-complete lack of architectural ornament, but the entryway was built to impress.

The city purchased the property in 1999 hoping to establish an alternative school, but ended up putting the site on the market instead.  A developer attempted to buy it in 2005 with plans to knock down the historic structures and build a wellness center, prompting a landmarking effort that was eventually shot down by the city council.  The developer ultimately backed out, and the buildings were once again allowed to decay.  Last November, the City of Yonkers issued a request for proposals for the site, favoring adaptive reuse of the existing facilities.  Paperwork is due in January.

Until then, the grounds achieve a kind of poetic symmetry in warmer months, when wild vegetation consumes the empty greenhouses, encroaching on the ruins of this venerable botanical institute…

Ornate balusters made this staircase the most attractive area of the laboratory.

A central oculus leads to this mysterious pen in the attic.

This stone sphere had been the centerpiece of the back facade, until someone decided to push it down this staircase.  See its original location here.

The city gave up on keeping the place secured long ago. 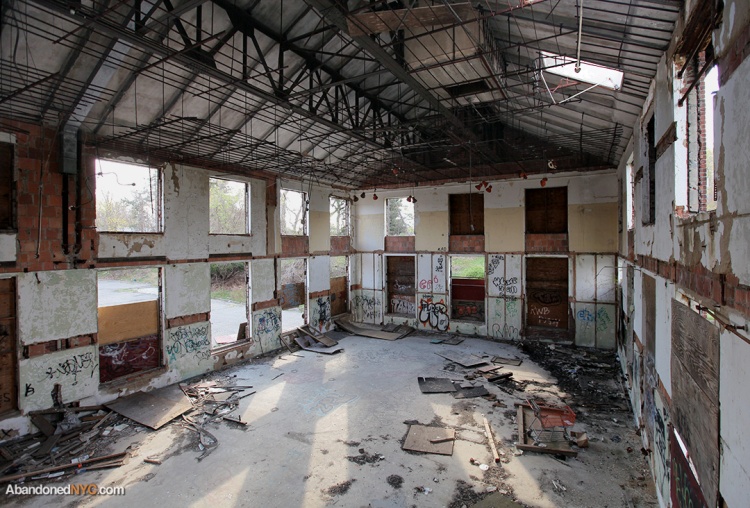 The north wing had been gutted at some point.

An interesting phenomenon in the basement–a population of feral cats had stockpiled decades worth of food containers left by well-meaning cat lovers. 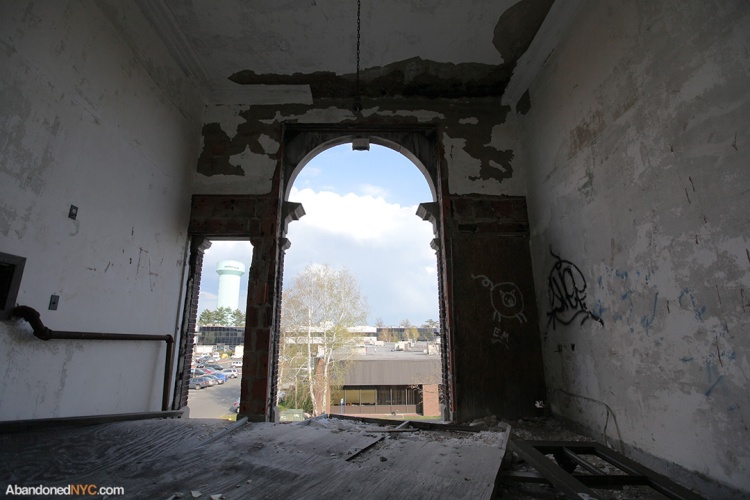 A view from the upstairs landing was mostly pastoral 75 years ago.

The main building connects to a network of intricate greenhouses.

The interiors were covered with shattered glass, but still enchanting.

10 thoughts on “Green Thumbing Through the Boyce Thompson Institute”