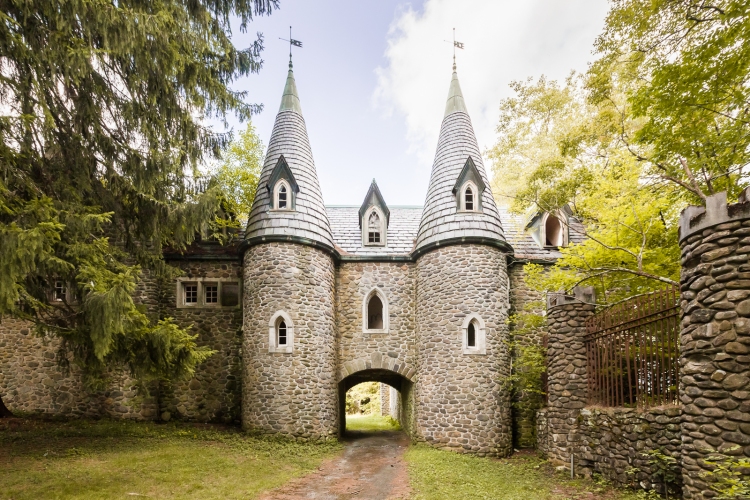 The entrance to Storybook Castle.

A deserted castle in the woods always has a few stories to tell. Maybe you’ve heard of the heart-shaped pools at Storybook that fill with blood on a full moon, or the Rapunzel-inspired succubus who hangs her hair to tempt gullible fishermen to their doom in the highest tower. Locals will tell you about the mad widow kept locked in a room with no doorknobs, who escaped on occasion to ride through town on horseback tossing gifts to children. (Supposedly, you can still find scratch marks where she clawed her way out.)

Most of these stories don’t hold water, of course, but the truth is nearly as strange.  For starters, no one has ever lived in the castle.

The facts are few but generally accepted.  Construction began in 1907 by a prominent New Yorker and heir to the builder of a famous canal. He transformed a nondescript wooden lodge that already stood on the property into a fanciful fairy tale castle modeled after a Scottish design, cutting corners with local river rocks on the facade but indulging in fine imported marble for the interior.  Some say the castle was built out of love for his ailing wife, who suffered from mental illness. Unfortunately, the owner died in 1921 just before the structure was completed. Instead of moving into the romantic hideaway, his grieving widow was checked into a sanatorium shortly thereafter.  The couple’s daughter and sole heir ran off to Europe with a new husband, leaving a caretaker to look after the unfinished castle.

The courtyard out back is periodically maintained, the lawn appeared to have been mowed recently.

In 1949, the property was purchased by the Prince Hall Grand Lodge of the Masonic Order, an African American group based in Manhattan.  The original plan was to convert the castle to a masonic home for the elderly, but it was instead used for many years as a hunting and fishing resort. Later, the property became a summer camp for inner-city youth. As far as I can tell, the expansive grounds still serve this function today, though the castle itself has reportedly only been used to creep out campers over the years.  There may be no more fertile ground for legends than a summer camp set in the vicinity of a derelict castle.  Tales of glowing green eyes, apparitions in white, moving portraits, and self-slamming doors abound.

In 2005, the Prince Hall Masons and the Open Space Initiative announced an agreement to protect the castle and surrounding land, limiting future development and prohibiting residential subdivision.  Unfortunately, nearly 10 years later, the castle is left completely vulnerable to vandals and exposed to the elements. Though the interior is remarkably well-preserved, several rooms are tagged up with uninspired graffiti.  For this reason, I’ve chosen not to reveal the true name or location of the castle, be advised that the building is located on private property. 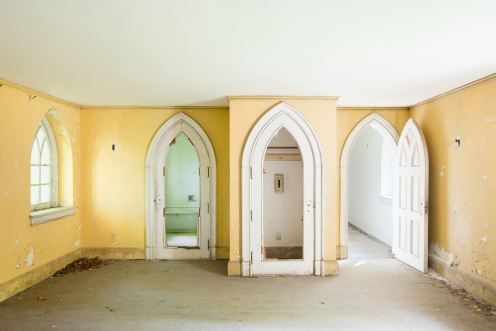 Gothic arches can be found on nearly every window and door of the structure. 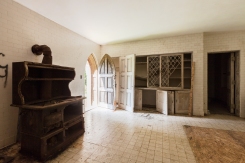 The kitchen held an antique stove and attractive cabinets. 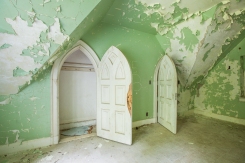 It’s incredible how the addition of this simple shape can completely transform the feel of the space.

Marble spiral staircases are housed in the two towers on either side of the front entrance. 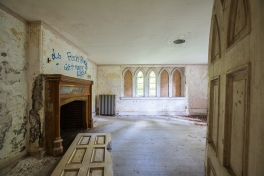 A bit of graffiti mars this otherwise well-preserved room. 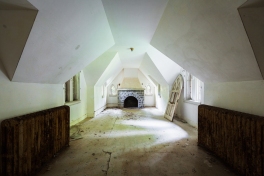 Many rooms held stone fireplaces, some were intricately carved. 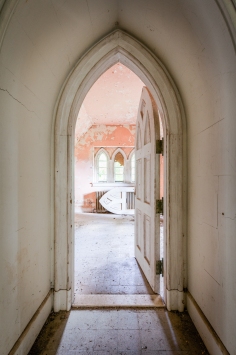 The doors were solid and quite heavy, most remained in their hinges.

A tower in the garden led downstairs to an underground chamber.

An adjacent tower looks out on a view of the creek below.

Saplings grow from the gutters but the roof is structurally sound.

15 thoughts on “Snooping in Storybook Castle”