The “Haunting” of Wyndclyffe Mansion

The abandoned Wyndclyffe Mansion broods over the Hudson River in Rhinebeck, New York.

The Hudson River Valley is home to more than its share of formidable ruins, but few match the spooky appeal of Rhinebeck’s Wyndclyffe Mansion.  Its beetle-browed exterior is blessed with that beguiling combination of gloom, ornamentation, and extreme old age that only the best haunted houses claim, and there’s no better time to witness them than late October, when autumn breezes send yellow leaves eddying through the hills and hollows of the old estate. It seems that the only thing this “haunted house” is missing is a good ghost story…

Much of what remains of the interior is far too unstable to access, this was taken from a window on the west side of the structure.

Murder, mayhem, and the supernatural don’t factor at all into the history of Wyndclyffe, but its past is compelling enough as it is. The manor was constructed in 1853 as the private country house of Elizabeth Schermerhorn Jones, who was a prominent member of an exceptionally wealthy New York family. Though palatial Hudson Valley estates were already in vogue among New York City’s ruling class, the magnificence of Wyndclyffe prompted neighboring aristocrats to throw even more money into their vacation homes so as not to be overshadowed by Elizabeth’s Rhinebeck abode. The house and the fury of construction it inspired is said to be the origin of the phrase, “keeping up with the Joneses.”

Three stories of the mansion visible in the curved dining wing of the structure.

Elizabeth was the aunt of the great American author Edith Wharton, who is known for her keen, first-hand insight into the lives of America’s most privileged, which she brought to bear in classics like Ethan Frome, The House of Mirth, and The Age of Innocence, for which she won the Pulitzer Prize.  (She’s also known for her ghost stories.)  In her early youth, Edith would spend summers in the house, which was known by her as “Rhinecliff.” She portrayed it in less than laudatory terms in her late-career autobiography “A Backward Glance” (1934):

“The effect of terror produced by the house at Rhinecliff was no doubt due to what seemed to me its intolerable ugliness… I can still remember hating everything at Rhinecliff, which, as I saw, on rediscovering it some years later, was an expensive but dour specimen of Hudson River Gothic: and from the first I was obscurely conscious of a queer resemblance between the granitic exterior of Aunt Elizabeth and her grimly comfortable home, between her battlemented caps and the turrets of Rhinecliff.” 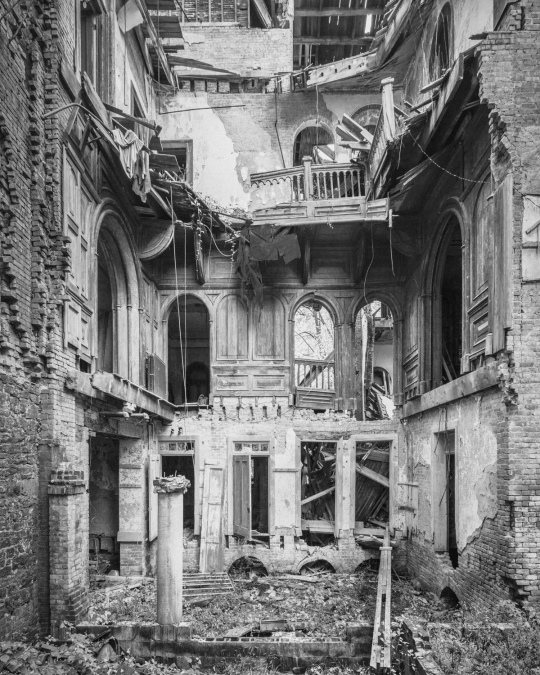 Many of the original architectural details are still visible in a collapsed section of the building, notice the wood detailing in the second floor parlor.

Her words bring to mind this passage from Shirley Jackson’s “The Haunting of Hill House” which describes the titular (fictional) structure:

“No human eye can isolate the unhappy coincidence of line and place which suggests evil in the face of a house, and yet somehow a maniac juxtaposition, a badly turned angle, some chance meeting of roof and sky, turned Hill House into a place of despair, more frightening because the face of Hill House seemed awake, with a watchfulness from the blank windows and a touch of glee in the eyebrow of a cornice.  Almost any house…can catch up a beholder with a sense of fellowship; but a house arrogant and hating, never off guard, can only be evil.”

Here’s the same room pictured in the 1970s, with the floor already severely damaged by a leaky skylight.

The modern eye is likely to be much more merciful to the embattled Wyndclyffe, evil or no.  Its beauty is readily apparent, and arguably enhanced, by the extent of decay it has suffered through 50 years of neglect.  But how does a house as expensive, distinctive, and historically relevant as Wyndclyffe end up in such a state?

When Elizabeth passed away in 1876, Wyndclyffe was sold to a family who maintained the house into the 1920s, but the succession of owners that occupied the mansion through the Great Depression struggled to keep up with the costly repairs it required. In the 1970s, the house had already been abandoned for decades as the Hudson Valley’s status as a playground for the wealthy declined. At this point, the property was purchased and subdivided, which pared down the grounds of the estate from 80 acres to a paltry two and half. This action more than any other spelled doom for Wyndcliffe—notwithstanding the astronomical expense required to renovate a partially collapsed 160 year old mansion, the lack of land surrounding the structure has made it an extremely difficult sell to potential buyers. While many nearby estates have been renovated into thriving historic sites after a period of neglect, Wyndclyffe has struggled even to remain standing.

A glimmer of hope appeared in 2003 when a new owner cleared most of the trees and overgrowth from the grounds, erected a fence, and announced plans to save the mansion. But as is often the case, good intentions fade in the face of financial realities. Eleven years have come and gone and the meager improvements are difficult to discern—thick saplings, tangled thorns, and shrubbery completely envelop the structure once again, and the progress of decay marches on. 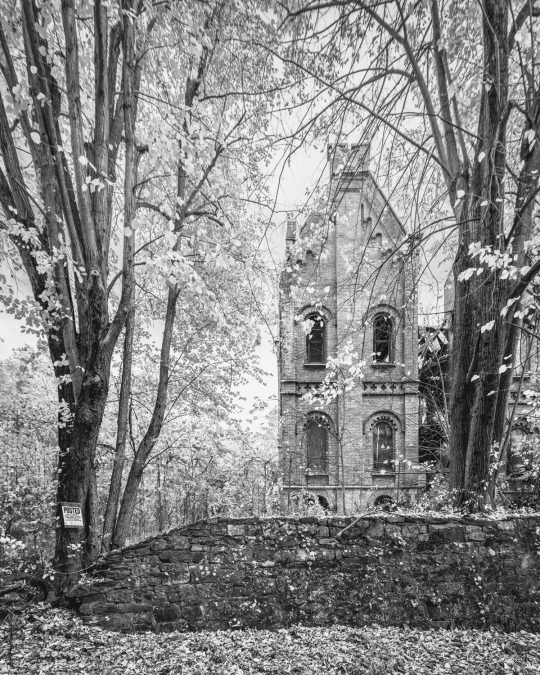 Numerous “No Trespassing” signs are posted around the property. State troopers are often summoned to the site when nearby homeowners alert them to suspicious activity.

Since Halloween is just around the corner, I’ll leave you with another eerie passage from Jackson’s “Haunting,” which is said by Stephen King (who should know) to be the best opening paragraph of any modern horror story. It deftly captures the uncanny appeal of empty buildings, and the persistent, however illogical, impression that a house continues to think, feel, and ruminate over its past long after it’s left behind by man.

“No live organism can continue for long to exist sanely under conditions of absolute reality; even larks and katydids are supposed, by some, to dream. Hill House, not sane, stood by itself against its hills, holding darkness within; it had stood so for eighty years and might stand for eighty more.  Within, walls continued upright, bricks met neatly, floors were firm, and doors were sensibly shut: silence lay steadily against the wood and stone of Hill House, and whatever walked there, walked alone.”

The entrance to Storybook Castle.

A deserted castle in the woods always has a few stories to tell. Maybe you’ve heard of the heart-shaped pools at Storybook that fill with blood on a full moon, or the Rapunzel-inspired succubus who hangs her hair to tempt gullible fishermen to their doom in the highest tower. Locals will tell you about the mad widow kept locked in a room with no doorknobs, who escaped on occasion to ride through town on horseback tossing gifts to children. (Supposedly, you can still find scratch marks where she clawed her way out.)

Most of these stories don’t hold water, of course, but the truth is nearly as strange.  For starters, no one has ever lived in the castle.

The facts are few but generally accepted.  Construction began in 1907 by a prominent New Yorker and heir to the builder of a famous canal. He transformed a nondescript wooden lodge that already stood on the property into a fanciful fairy tale castle modeled after a Scottish design, cutting corners with local river rocks on the facade but indulging in fine imported marble for the interior.  Some say the castle was built out of love for his ailing wife, who suffered from mental illness. Unfortunately, the owner died in 1921 just before the structure was completed. Instead of moving into the romantic hideaway, his grieving widow was checked into a sanatorium shortly thereafter.  The couple’s daughter and sole heir ran off to Europe with a new husband, leaving a caretaker to look after the unfinished castle. 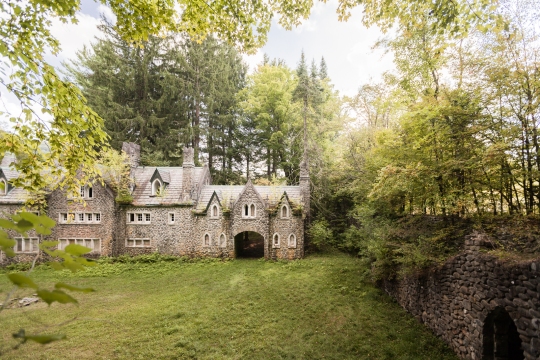 The courtyard out back is periodically maintained, the lawn appeared to have been mowed recently.

In 1949, the property was purchased by the Prince Hall Grand Lodge of the Masonic Order, an African American group based in Manhattan.  The original plan was to convert the castle to a masonic home for the elderly, but it was instead used for many years as a hunting and fishing resort. Later, the property became a summer camp for inner-city youth. As far as I can tell, the expansive grounds still serve this function today, though the castle itself has reportedly only been used to creep out campers over the years.  There may be no more fertile ground for legends than a summer camp set in the vicinity of a derelict castle.  Tales of glowing green eyes, apparitions in white, moving portraits, and self-slamming doors abound.

In 2005, the Prince Hall Masons and the Open Space Initiative announced an agreement to protect the castle and surrounding land, limiting future development and prohibiting residential subdivision.  Unfortunately, nearly 10 years later, the castle is left completely vulnerable to vandals and exposed to the elements. Though the interior is remarkably well-preserved, several rooms are tagged up with uninspired graffiti.  For this reason, I’ve chosen not to reveal the true name or location of the castle, be advised that the building is located on private property. 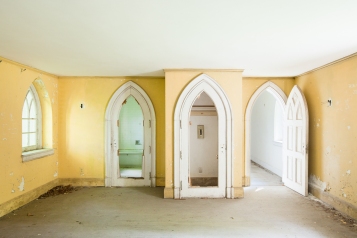 Gothic arches can be found on nearly every window and door of the structure.

The kitchen held an antique stove and attractive cabinets.

It’s incredible how the addition of this simple shape can completely transform the feel of the space.

Marble spiral staircases are housed in the two towers on either side of the front entrance.

A bit of graffiti mars this otherwise well-preserved room.

Many rooms held stone fireplaces, some were intricately carved. 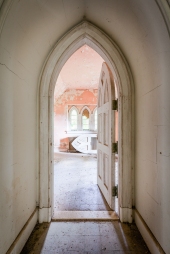 The doors were solid and quite heavy, most remained in their hinges.

A tower in the garden led downstairs to an underground chamber.

An adjacent tower looks out on a view of the creek below.

Saplings grow from the gutters but the roof is structurally sound.