There’s a stretch of the Arthur Kill between Rossville, Staten Island and Port Reading, New Jersey that’s something of an abandoned wonderland.  From the New Jersey side, the horizon is dominated by the twin natural gas tanks of Chemical Lane, and the famous Staten Island Boat Graveyard is plainly visible just across the water.  But towering over the scene is a structure that rivals both with its staggering beauty and power—the McMyler Coal Dumper.

Actually, it would be more accurate to call it a McMyler Coal Dumper. It was one of many nearly identical structures built on the shores of the New York Harbor in the early-to-mid 20th century, including two on Pier 18 in Jersey City. But the Port Reading site is notable for being the last one standing in the New York area. It was constructed in 1917, making it 99 years old at the time of this post.

In a vast regional network of coal mines, breakers, railroads, and manufacturing hubs, these machines provided a vital link that helped fuel New York’s industrial age, transferring massive amounts of coal brought by rail from Pennsylvania and the Alleghenies into ships entering the harbor.  A McMyler Dumper could unload a 72-ton car of coal every two and a half minutes, operating on a continuous loop for maximum efficiency.

Upon entering the pier, railroad “hoppers” carrying a full load of coal would be pushed up a ramp with a mechanism called a barney. Once in position at the base of the tower, the entire car and its contents would be lifted up on an unloading platform and tilted at 120 degrees, spilling the coal into an enormous “pan,” which funneled the material through an unloader chute and into the holds of outgoing barges. Once empty, the car would be lowered and pushed onto a kickback trestle by the next car in the line-up.  These rails looked very much like a roller coaster, and they worked in a similar fashion, using the power of gravity to propel empty cars off of the pier and into the rail yards beyond. The contraption required twelve men to operate, and the work was risky. The brute force of the machine claimed many lives and limbs over the years.

A braver soul would have climbed the tower, but I was satisfied with the view from the pier.

The design stood the test of time, and the pier operated for over 60 years with nearly uninterrupted use (a fire caused considerable damage in 1951, but the unloader was quickly rebuilt.) With demand for coal declining, the machine dumped its last load in the early 80s, and has been steadily deteriorating ever since. Though there has been interest in designating the structure an historic site, its location on private property in an active industrial area has made it an unlikely candidate, and the cost of restoring or moving the structure would be prohibitive, to put it mildly.  Unless new industrial development threatens the site, it will likely remain a picturesque ruin for another century before eventually collapsing into the Kill and vanishing into the muck.

That is lucky for the throng of Canada Geese who’ve made a surreal home out of the hulking relic.  Though they’re nice to look at, I’ve never had a pleasant encounter with these creatures, and have been charged at by enough of them on the remote shores of the outer boroughs to know they mean business.  This time around they were content to squawk and hiss their disapproval from a distance, but I would advise everyone to stay far away during nesting season, which is right around the corner.

The self-appointed guardians of the coal dumper. 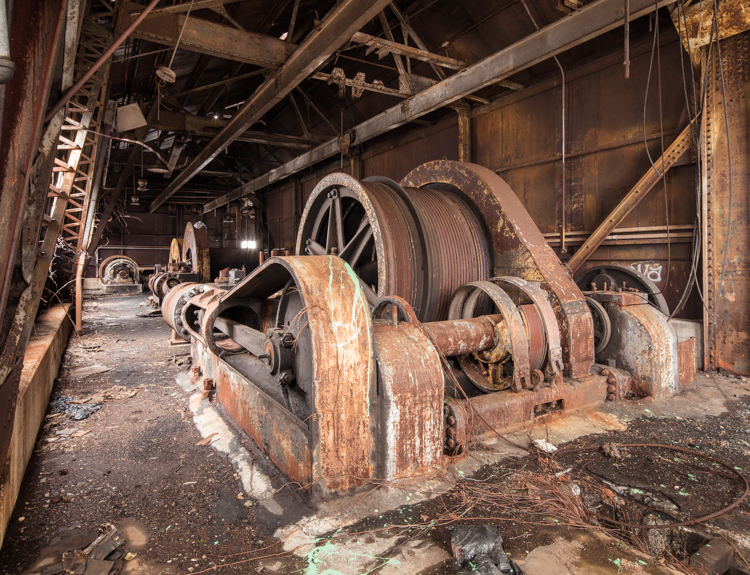 …which controlled the “barney,” a mechanism used to push cars onto the unloading platform.

These cable drums raised and lowered the unloading platform.  Much of the machinery has been removed by scrappers over the years. 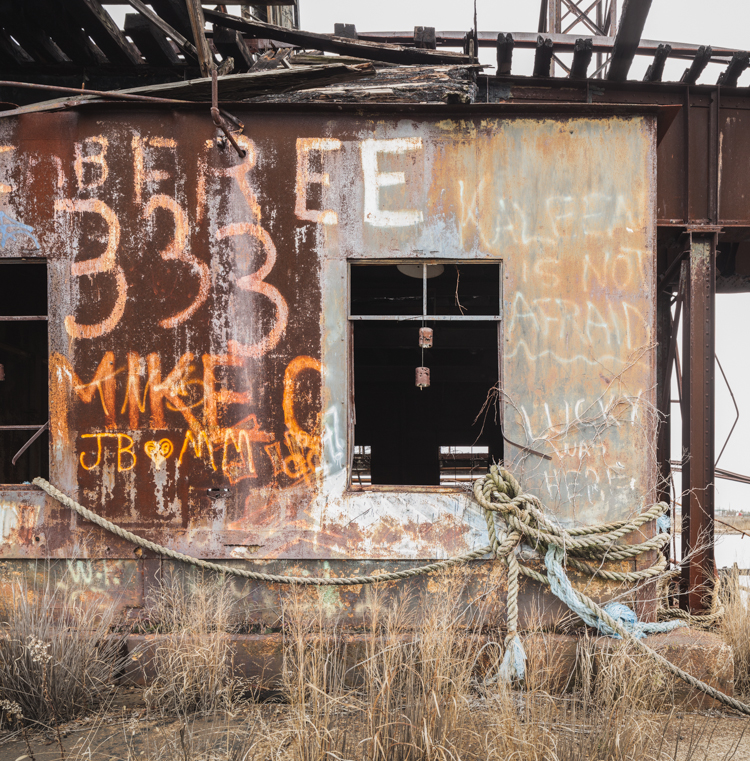 The place has a fair amount of graffiti, some quite old. Kaleen’s protestation on the upper right was particularly endearing.

A derelict ferry boat sinks into the Kill on an adjacent pier.

The pan and chute, pictured here, were left in an upright position until Hurricane Irene sent them crashing onto the pier below in 2011.  An operator would have sat in the little chamber on the right. A pair of abandoned gas tanks in Rossville, Staten Island can be seen on the horizon.

You can see (a model of) a McMyler Coal Dumper in action in the following video: