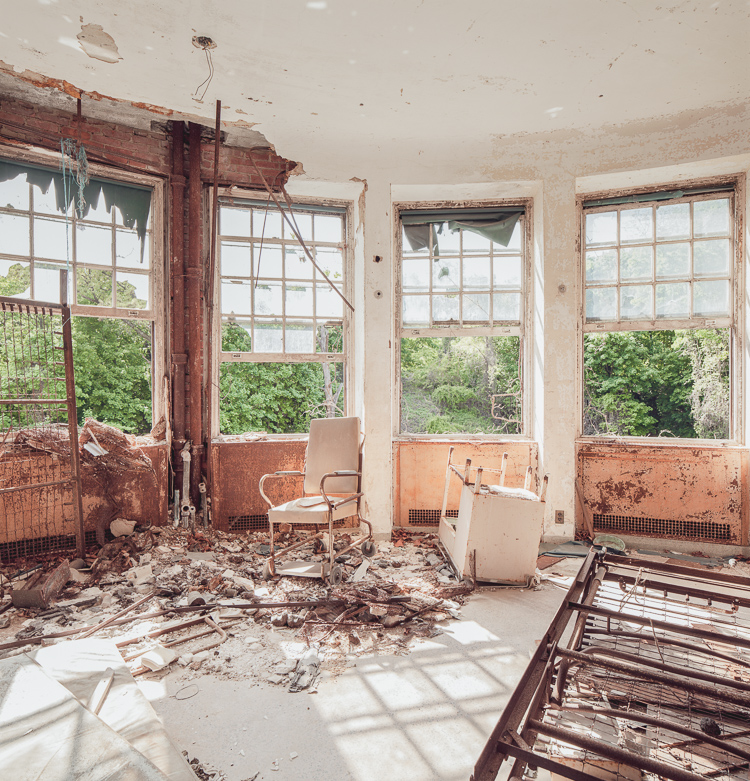 At the turn of the twentieth century, tuberculosis was the second leading cause of death in the city and a major world health concern known to disproportionately affect the urban poor. In New York City, two-thirds of the 30,000 afflicted were dependent on city agencies for treatment. Growing concern from charitable organizations spurred the establishment of New York’s first public hospital designed exclusively to treat tuberculosis, care for the “sick, poor, and friendless,” and keep the epidemic under some measure of control by isolating sufferers from general hospitals. If you were diagnosed with tuberculosis in the early 1900s, your prognosis was grim. Lacking a cure, the only treatments thought to ease symptoms were fresh air, rest, sunshine, and good nutrition. A pleasant view was also considered essential for staving off depression. For this reason, hospital planners settled on a privately owned 25-acre hilltop parcel in rural Staten Island called “Ocean View,” just across from the already established New York City Farm Colony.

The plot was surrounded by a vast expanse of forested land (known as the Greenbelt today) which enabled the hospital grounds to expand as necessary. When Sea View Hospital was dedicated on November 12, 1913, the New York Times called it “the largest and finest hospital ever built for the care and treatment of those who suffer from tuberculosis.” The Commissioner of Public Charities claimed it was “a magnificent institution that is vast, ingenious, practical, convenient, sanitary, and beautiful, the greatest hospital ever planned in the world wide fight against the “white plague.”  Though the new facilities effectively eased the suffering of tuberculosis patients and provided housing for the poor, little could be done to actually save lives in the long term. Most eventually succumbed to the disease.

Saplings take root in a light-filled solarium on the top floor. (Prints Available)

Two window fixtures had vanished, offering an unobstructed view of the surrounding woodlands.

Doorway into an open-air pavilion. 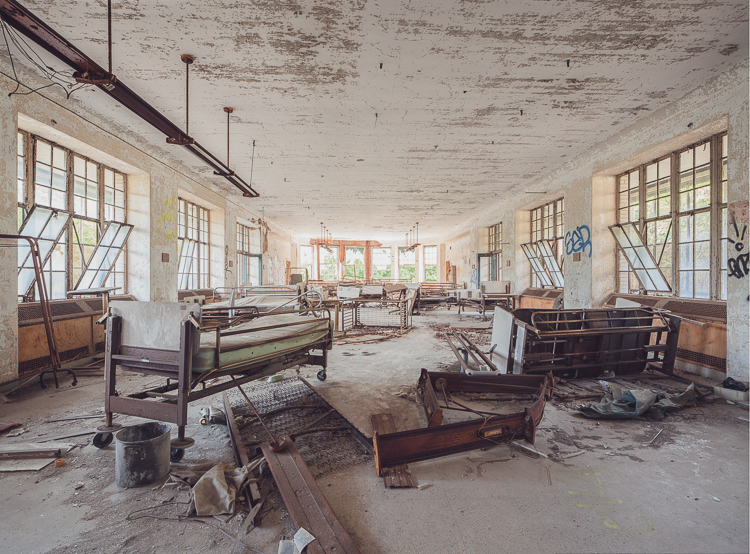 Hospital beds, cribs, and equipment left behind in a day room on a lower floor. (Prints Available)

In 1943, the development of the antibiotic streptomycin at Rutgers University led to a series of breakthroughs in the treatment of tuberculosis over the next decade, and much of that research took place at Sea View Hospital.  The enthusiasm over these dramatic developments is captured in a 1952 report by the Department of Hospitals: “Euphoria swept Seaview Hospital.  Patients consigned to death at the hands of the White Plague celebrated a new lease on life by dancing in the halls.”  The transition was swift. By 1961, Sea View’s pavilions were practically emptied as patients miraculously recovered as a result of the new therapies. Today, a long-term care facility operates in several of the buildings and some structures have been repurposed by community agencies and civic groups, but much of the Sea View Hospital campus lies abandoned.

Past a fenced enclosure delineating the active section of the hospital, the grounds give way to the bramble-choked wilds of the Staten Island Greenbelt. The creepy ruins of the old women’s pavilions situated on the northern border are a popular detour on hikes from the neighboring boy scout camp. To the east lies the imposing Children’s Hospital, completed in 1938 and abandoned in 1974.  Its spacious, window-lined solariums are typical of earlier Sea View wards, flanked on either side by open-air porches which were occupied by recovering patients 24 hours a day during the height of the epidemic. In an otherwise clinical Landmarks Preservation Commission report published in 1985, the researcher notes that “the building rises from a deep slope… Wooded surroundings, particularly dense to the east and south of the building, enhance the sense of isolation.”  The view he’s describing is indeed one of New York City’s most surreal (pictured below in 2012). 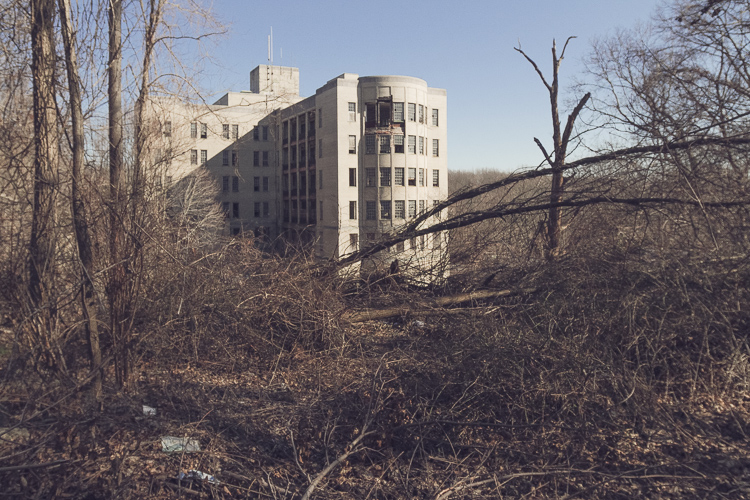 The ominous Children’s Hospital, seen from a hilltop on the grounds of Sea View Hospital.

Reuse of the structure seems extremely unlikely given the large number of abandoned buildings within the active hospital complex that would make better candidates for restoration.  Area conservationists are fighting to keep the surrounding woodlands protected from developers by making it a permanent part of the Greenbelt network of natural areas, and the building itself is nominally protected from demolition as part of Sea View Hospital’s historic district designation. That doesn’t mean that the building won’t serve a purpose as it continues to crumble.  As I’ve mentioned in previous posts, Staten Island teenagers have a long history of voraciously exploring (and vandalizing) their local ruins. With the renovation of the Willowbrook State School in the 1990s, the later demolition of the Staten Island Monastery, and the impending restoration of the New York City Farm Colony, the isolated, under-the-radar Children’s Hospital may be next in line as the site of that requisite rite of passage. Only time will tell.

There’s little to suggest the building was used exclusively as a children’s hospital in its last years of operation.

Even the restrooms had windows for observation.

Drifts of plaster pile up on a table outside the darkroom. 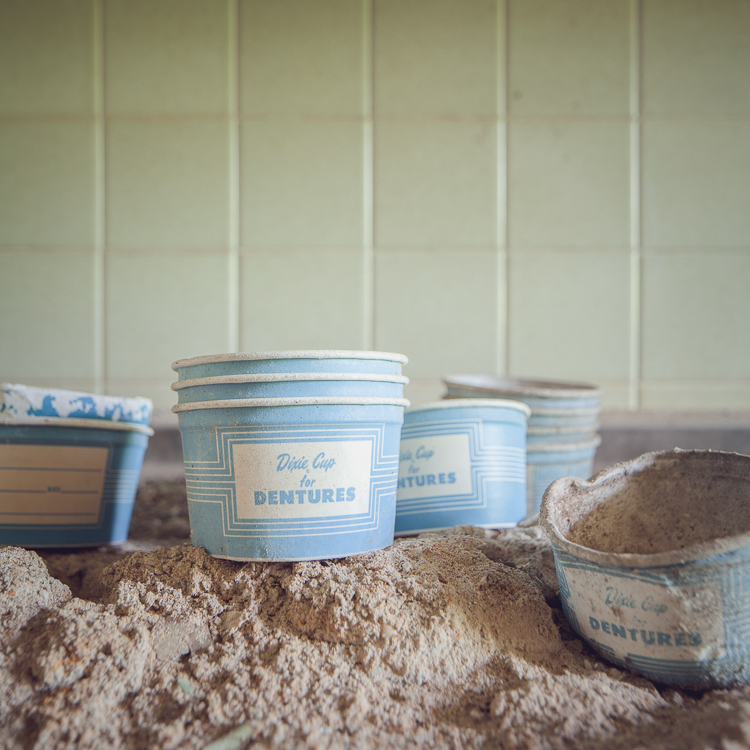 “Dixie Cup for Dentures.” The name says it all.

A storage room in the attic had been pillaged. 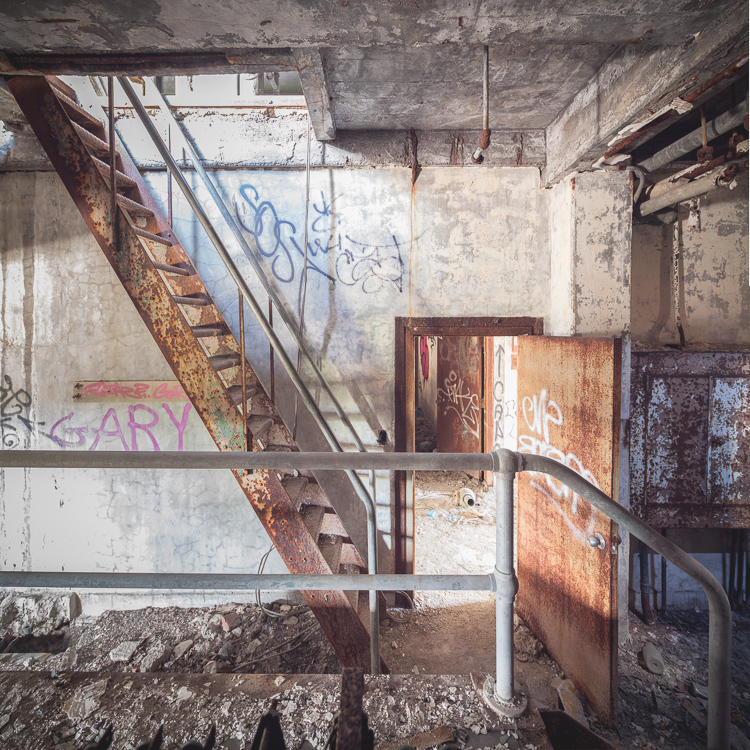 A steep staircase led to the upper reaches of the utility floors.

Lowers floors were boarded up, which always allows for the eeriest light. (Prints Available)

The last room I came to was the most surprising–a boarded-up dayroom piled several feet high with hospital records. 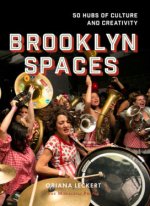 IN OTHER NEWS… my friend Oriana Leckert‘s book “Brooklyn Spaces” is out this week.  We’re a bit like kindred spirits, Oriana and I, but she goes more for the crowded, lively, and creative than the empty, eerie, and decrepit. The (50!) places profiled in the book show the authentic, human side of the global phenomenon that is “Brooklyn cool,” highlighting the heartfelt endeavors of a wave of culture makers that migrated to the borough for cheap rent and fashioned a network of bustling performance venues, art enclaves, and meeting places out of Brooklyn’s post-industrial landscape.  Her obvious passion for offbeat museums, community gardens, communal living spaces, and out-there artist residencies is beyond infectious. Do yourself a favor and pick up a copy! And head to what I’m sure will be a raucous, sweaty launch party on May 30th.