This tag is associated with 13 posts

I wasn’t able to track down any information on the function of this obscure outbuilding of the Bayley Seton Hospital complex in Stapleton, SI.  The austere, three-story edifice is the only abandoned structure within the active section of Bayley Seton, situated on the northeast corner of the grounds behind the main building.  The rest are fenced off and awaiting demolition after being sold to make way for a new development—it’s likely that this building may hang on for a bit longer.

For a detailed history of Bayley Seton Hospital, refer to my last post on the Nurses’ Residence.

If you have any information on this building, please enlighten me in the comments below.

Another view of the Utility Room. This door fell out of the wall when I tried to open it.

The floor of this room was covered with a rank, pulpy, mush—apparently the remains of ceiling panels that had gone to rot.

One of several pieces of furniture remaining in the building.

A toilet with a strange weighted contraption.

An examination chair tucked away in the stairwell.

Graffiti in the building was minimal, but this bit stood out.

The building at sunset, just before a security guard asked me to leave…

A floundering medical complex sits on a 20-acre campus in Stapleton on the North Shore of Staten Island.  Today, eight of Bayley Seton Hospital’s twelve buildings lie abandoned, the largest being the old Nurses’ Residence at its southeast corner.

The grounds of BSH house Staten Island’s first hospital, an historic colonnaded structure built in the 1830s to serve ailing retired naval and merchant sailors, appropriately named “the Seamen’s Retreat.”  Change came to the site in 1858 when a mob of 30-40 prominent locals attacked and burned down the Port of New York Quarantine Hospital, located a mile north of the Retreat.  Though this horrific incident was incensed by an outbreak of yellow fever the locals blamed on the nearby hospital, flagrant racism was most likely a factor—recent immigrants made up the majority of the hospital’s population.

Some of the quarantine station’s services were transferred to areas of what is now Bayley Seton Hospital, and placed under the jurisdiction of the Marine Hospital Service, which by 1885 controlled the entire complex, and by 1902 had been renamed the US Public Health Service.  In the 1930s, President Roosevelt started a campaign to revitalize The Public Health Service Hospitals, resulting in the construction of the main seven-story art-deco building and its offshoot Nurses’ Residence, a winged four-story structure on the southeast corner of the property.

The hospital was sold to the Sisters of Charity of New York, a Catholic healthcare organization, in 1980.   At this point the U.S. Health Service Hospital was renamed after Sisters’ founder Elizabeth Seton and her father Richard Bayley (who coincidentally once headed the ill-fated Thompkinsville Quarantine Hospital.)  Under the Sisters of Charity, the hospital was predominantly used to treat mental disorders and substance abuse, and continues to fulfill this role today, albeit at a greatly diminished capacity.

In 2000, The Sisters of Charity turned over Bayley Seton to the related Saint Vincent’s Catholic Medical Center, which faced financial troubles at the Stapleton campus from the beginning.  Over half of its services were suspended and the hospital fell into an inexorable decline.  Plans to close Bayley Seton emerged in 2004 as Saint Vincent’s, once the largest Catholic Health organization in New York, filed for bankruptcy with a debt of over a billion dollars.  At some point during this tumultuous period (artifacts point to the building last being inhabited in 2002,) the former Nurses’ Residence, which had most recently been used as a New York addiction treatment facility, was abandoned as part of an ongoing series of downsizings and closures.

One of many gutted rooms, beginning to show signs of age.

In 2009, The Salvation Army settled on a 7.6 million dollar deal to purchase 7 acres of BSH.  Originally, plans called for the construction of a 120,000 square-foot community center in the footstep of the Nurses’ Residence, set to begin in 2011, followed by a two-year period to terminate Bayley Seton’s remaining services, after which the main building would also be converted into senior housing.  If it’s ever built, the center will be one of 30 similar complexes across the country funded by a 1.5 billion dollar endowment by the late Joan Kroc, widow of McDonald’s founder Ray Kroc.  The Salvation Army failed to raise the 25 million needed to cover the difference between its cut of the Kroc endowment and the projected cost of construction, and ground has yet to be broken. 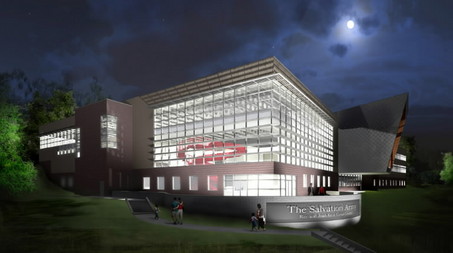 Twelve foot chain link fences have been placed along the perimeter of the Salvation Army property, but the site is otherwise untouched.  Fenced-off and boarded-up, the Nurses’ Home ages in secret.  Walls molt through layers of colored paint under tumbledown ceilings.  The unrecognizable contents of a half-dozen milk cartons fester in a neglected refrigerator.  An upright piano keeps mum in an empty common room while activity slows to a trickle on the rest of the Bayley Seton Hospital campus.  Here and there, artifacts remain—painted crafts, motivational posters, hand-drawn cartoons—evoking the human element of the hospital’s better days.  With its subtle architectural charms, the Nurses’ Residence has little hope of being saved from the wrecking ball, (though a few conservationists are out to change that.)  Those in power seem to agree—despite centuries of convoluted history, it’s time to pull the plug on Bayley Seton Hospital.

For more photos of Bayley Seton Hospital’s abandonments, go on to PART II.

Lettering here once pointed out the “Professional Services” office.

A kitchen on the top floor in the early stages of decay.

The contents of a staff-only refrigerator left long after their expiration dates.

This piano wasn’t worth the difficulty in transporting it.

Mold spreads on the walls of a first floor residence.

Another creepy hallway of the former Nurses’ Home.

An exterior view of the abandoned Nurses’ Home as it stands today.

A Watery Grave for Historic Ships on Staten Island

Do you know how to get to Staten Island’s most remarkable graveyard?  First pass through a centuries-old roadside cemetery, (consisting of a handful of horribly eroded grave markers).  Follow a barely there garbage-strewn path down to the marshy Arthur Kill (kill is the Dutch word for creek, which explains why creepy names like “Fresh Kills” abound in the Dutch-settled Hudson River Valley.)  Once your feet are sinking a few inches into the mud with every step, you’ll start seeing the boats.  Some over a century old, steam vessels, warships, ferries, fireboats, the final vestiges of New York’s shipping era, doomed to die here in a catastrophically polluted Staten Island waterway.  Welcome to the Arthur Kill Boat Graveyard.

Secluded path from the cemetery down to the Arthur Kill.

Operational since the 1930s, Witte’s Marine Equipment company in Rossville served to dredge, salvage, and resell materials from the wrecked and disused vessels of the New York and New Jersey waterways.  Eccentric owner John J. Witte refused to dismantle the majority of the ships that came to rest in the yard, amassing a prodigious collection of over 400 historic watercraft.  As the ships slowly decomposed and the area gained a reputation as a mecca for artists and photographers, Witte gained his own reputation as a ferocious defender of his property, known for scaring off unsolicited visitors personally until he passed away in 1980.  The yard is now controlled by the Donjon Marine Company, which seems to be taking a more proactive approach to actually salvaging materials from the wrecks and keeping the curious out, erecting 12-foot metal walls around the perimeter of the yard with signs prohibiting any and all photography.

The walls presented an obstacle, but after several muddy minutes I made it to the Arthur Kill Shore.  Though the shipyard had lost most of its former glory, the remaining 20-40 wrecks were still an eldritch sight to behold—half submerged in years of muck, leaning at odd angles, corroded in streaks of rust, putrefying elbow to elbow with massive skeleton hulls.  These wade out their final days in the boneyard before being stripped and recycled into automobiles and refrigerators.  So see them while you can, if you dare, what was once the city’s premiere collection of nautical artifacts is sinking fast.

Rotting hulls jut from their shallow graves at the Arthur Kill Ship Graveyard.

Rusty Boats pile up on the shore.

A salvaged wheelhouse moulders in the marsh.