Inside the Jumping Jack Power Plant

The main floor of the “Jumping Jack Pump House”

Lately the lack of abandoned buildings in the five boroughs has had me ruin-hunting on the distant shores of New Jersey and the Hudson River Valley. But all the while there was something incredible hiding in plain sight just a ten minute walk from my apartment.  Just when it seems there is nothing left to find, this city will surprise you.

I had admired the building for some time, having first spotted it on a walk around my neighborhood a year or two ago.  It was obviously some long-forgotten industrial relic, with a rather plain, but towering, facade. I had never heard of the place and could only find a single picture of it on the world wide web, with nothing of the interior. It seemed, at the time, that this could be one of the exceedingly rare “undiscovered” abandoned buildings in New York City. Who knew what it might look like inside?  Most likely an empty shell, I thought, or else I would have heard of it. 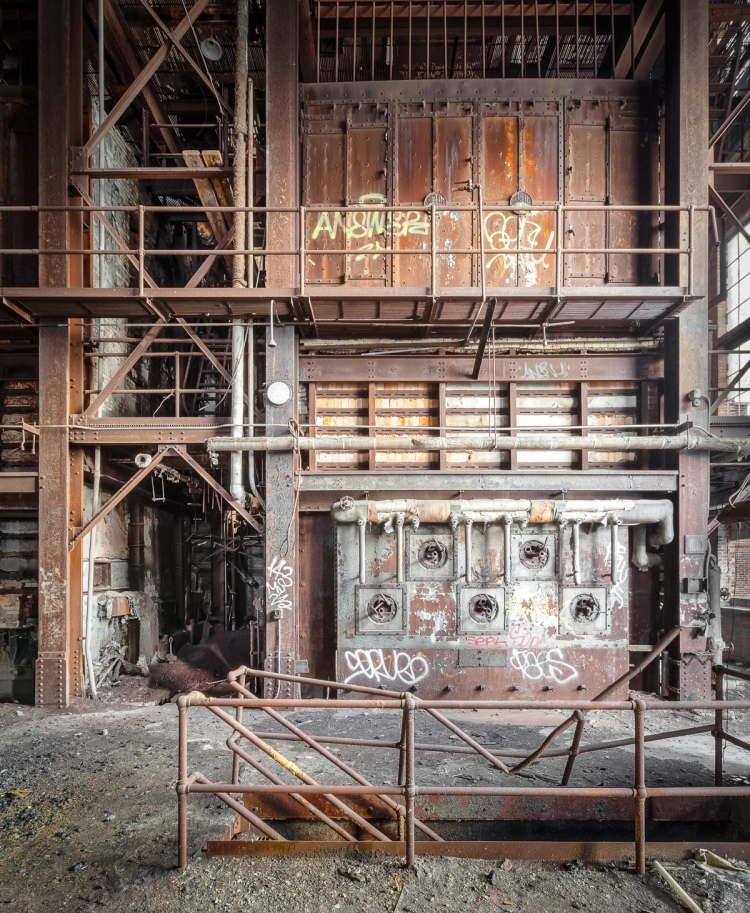 Not quite an “empty shell.”

It lingered long in my daydreams through the coming months, but I never attempted to stop in until December, when out of the blue I found myself walking in the direction of that mysterious building, camera and flashlight in hand. Inside, I couldn’t make out much at all but a collapsing ceiling and a floor padded with decades of rust and grime. I went looking for a way to the next level, finding several impassible staircases before settling on one that was relatively intact.  Upstairs, I treaded over some rickety catwalks and continued into the main room.

With coal crunching underfoot, I gazed up at the grand four-story gallery of rusted machinery before me. It was likely about a century old, gleaming orange in its old age, scattered here and there with flecks of sunlight cast through the broken windowpanes on the south side of the hall.  A hulking configuration of steel beams suspended over all, looking unmistakably like a man doing a jumping jack. Its actual function remains a mystery to me.

Judging by the amount of graffiti, I wasn’t even close to being the first person to find this place, and others have informed me that it’s fairly well-known among diehard explorers.  After some careful inspection, it appears that some (though not all) of the graffiti is quite old, I’d guess from the late 70s and 80s judging by the style, and the way in which it has aged, rusting or peeling away with underlying layers of paint and metal.

Paper records from inside the building point to the year 1963 as the last time the plant was in operation.  My theory is that the building had been abandoned and left pretty vulnerable to trespassers for a couple of decades before being sealed up tightly some time in the 80s or 90s.  Until recently, it’s been relatively untouched since those days, making it something of a time capsule of a grittier New York.  Prior to being secured, part of the ground floor was apparently used as a chop shop. An abandoned and gutted automobile  had been walled in at some point, entombed like a mosquito in amber on the ground floor.

I can only speculate about what the building was actually used for. My guess would be a coal-burning power plant of some kind, though some artifacts refer to a “pump house.”  (UPDATE: These records seem to refer to a separate building, which is still standing a few blocks away. In light of this, I’ve changed the name of this post to “Jumping Jack Power Plant” from “Jumping Jack Pump House”) I could tell you a bit more about its history but I don’t want to give away too much. “Undiscovered” or not, this place is still pretty under the radar, and I’d like to keep it that way for now. 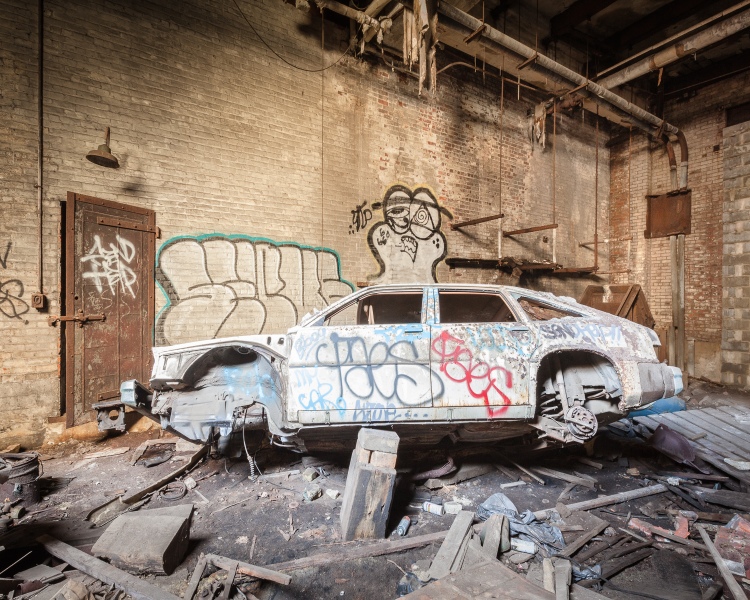 A gutted car in the ground floor chop shop. 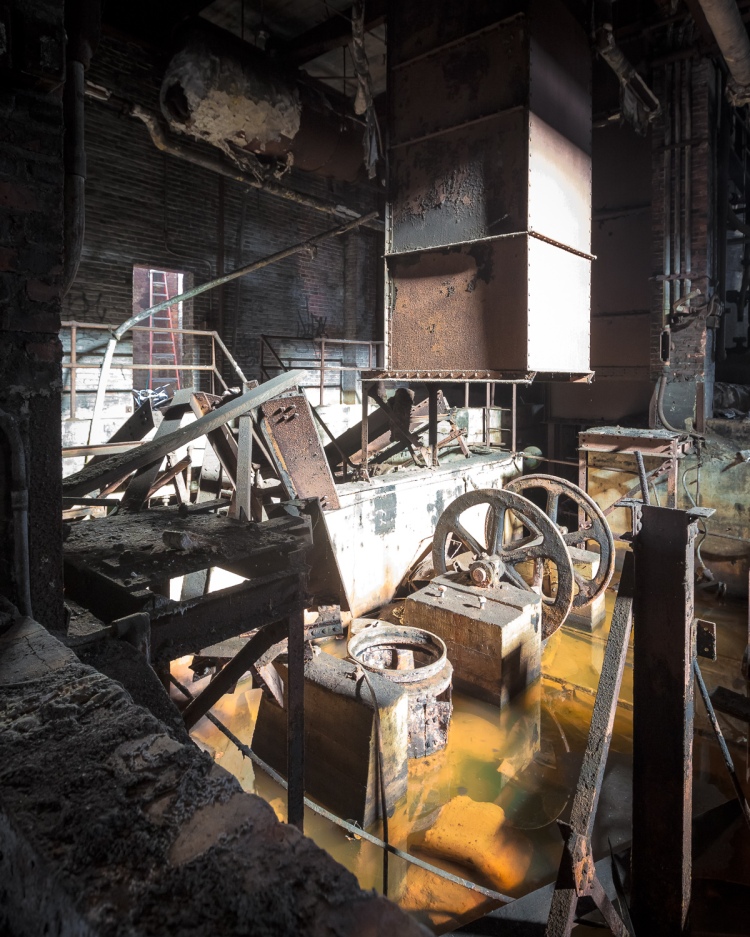 A flooded section of the lower level.

A boiler submerged in a 10-ft pile of coal. 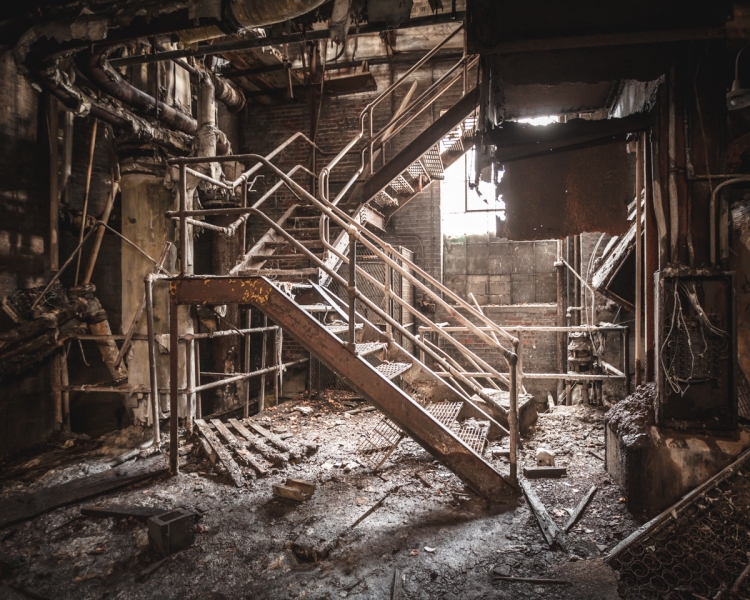 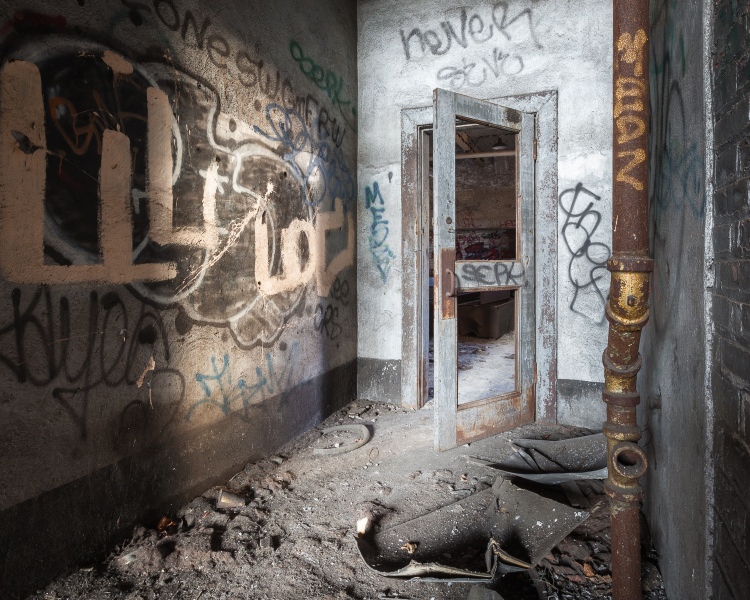 Hallway leading to the locker room.

The locker room was heavily tagged.

Detail of the control panel. 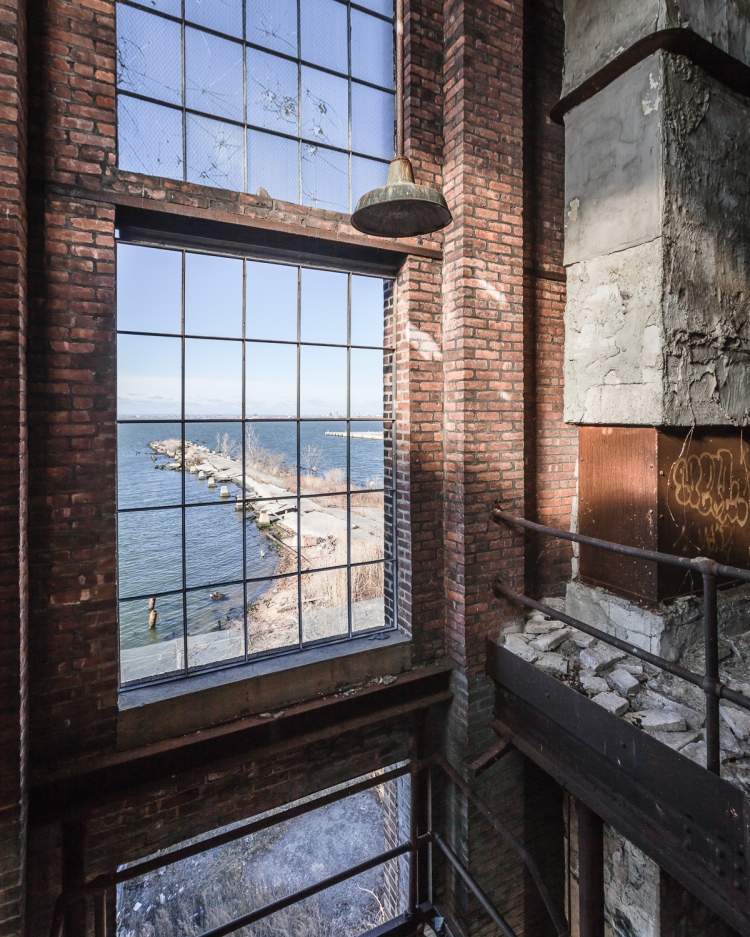 A heartfelt thank you goes out to everyone who’s picked up a copy of my book, and for all of your thoughtful comments.

If you haven’t gotten yours yet, you can head over to abandonednycbook.com to order a signed copy and a free print directly from me, which is the best way to support what I do.  (You can also get them on Amazon if you want to save a few bucks.)

It was so great meeting some of you at my Red Room talk last week. If you couldn’t make it to that one, you can still stop by one of these events this month and get your book that way.  Hope to see you there!