Join Me on a Tour of Dead Horse Bay! 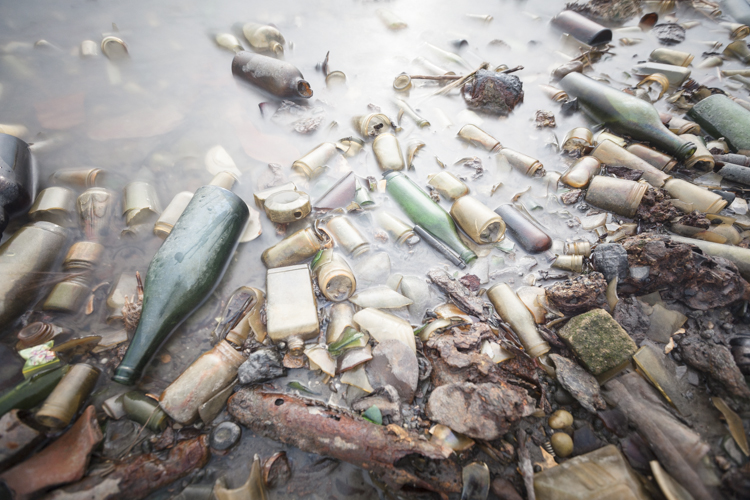 Beginning in the 1850s, this area of the Brooklyn waterfront served as the final destination for the city’s carriage horses. Horse carcasses were delivered by barge to gigantic bone boiling plants and processed into glue and fertilizer. Following the rise of the automobile and a series of natural disasters, the factories closed down and fell to ruin. What was then a marshy landmass called “Barren Island” was filled in with garbage and connected to mainland Brooklyn. The southern tip of the new peninsula was used as an active landfill from the 1930s to the early 50s.

Over the last 60 years, the man-made beach at Dead Horse Bay has slowly eroded away, and decades’ worth of trash have been gradually excavated from the soil.  At low tide, garbage covers the beach, and the vast majority of it dates back to the 1930s and 40s.  There’s a preponderance of glass, not plastic, bottles.  Some bear the faded trademark of long-lost brand names. Tellingly, most of the toys and trinkets were “Made in the U.S.A.”  Others originated in “Occupied Japan.”

The beach is open to the public as part of the Gateway National Recreation Area, and I know that many of you are adventurous enough to visit on your own.  But if you’d prefer a slightly more structured group activity, this tour won’t disappoint.

Some familiar brand names among the old bottles.

What are the transport/parking options getting to the event?

Dead Horse Bay is remote and easy to miss, so we’ll be meeting at a predetermined location in Flatbush that’s easily accessible by subway and taking the bus over together.  You’ll recieve an email with detailed meeting instructions beforehand.  The tour itself will take around two hours, but you can expect to be back at the meeting point 3 hours from the start time.  If you prefer to drive, free parking is available in Floyd Bennett Field, just across the street from the beach.

What can I expect from the tour?

After a short bus ride to the waterfront, we’ll be making a loop through Dead Horse Bay’s natural areas, covering the entire shoreline affected by the breached landfill.  Along the way, I’ll give you an account of the rise and fall of Barren Island’s industrial age, including the plight of the factory workers, the efforts of the “Anti-Barren Island League,” and the story of how the island became infested with 1,000 wild hogs. Then you’re free to explore on your own before we reconvene for an informal “show and tell” where we’ll show off our favorite finds from the day. More info and ticketing available here.

Is it OK to take things from the beach?

While a few might bristle at the thought of removing “artifacts” from Dead Horse Bay, there is no official word on the issue.  A steady stream of artists, crafters, and collectors have been gathering supplies and curios here for years, without much of a reduction in the overall amount of garbage.  Generally, I don’t have a problem with removing things from the beach (I’m certainly guilty of it.)  But since we’ll be visiting as a group, I do want to minimize our impact as much as possible.  I won’t stand in your way if you’d like to take home a bottle or two, but the best policy might be to leave things behind for others to enjoy.

Here’s a few of the best finds I’ve made over the past few years: (Click to enlarge)

See more photos and a detailed history of Dead Horse Bay in my book, Abandoned NYC.

Through all of my travels in New York City’s neglected parks, waterways, and abandoned buildings, I’ve picked up a few souvenirs. Most of the time, I abide by the “leave nothing but footprints, take nothing but pictures” rule, but some objects I come across are too fascinating, too mysterious, or too grotesque to leave behind. You don’t find treasures like these on the bustling streets of Soho or Times Square, but out in the far-flung corners of the outer boroughs, or deep in the recesses of a long-abandoned building, things have a way of piling up and sticking around. These are a few of my favorite finds from an ongoing collection I call New York, Lost and Found. (see the rest here)

You wouldn’t expect to find doll parts in a Navy barracks, but somehow this misfit toy ended up in a crumbling hallway at Floyd Bennett Field, New York City’s first municipal airport.  She’s got more to offer than an incredible hairstyle and a terrifying expression. Press the button on her navel, and those scaly arms come to life!

A stolen wallet lingered on the tracks of an abandoned railroad line in Queens for 25 years before I came across it.  I attempted to track down the owner, but my search came up empty. (The credit cards expired in 1986.)

A dapper young man poses for a senior photo in this wallet-sized portrait I picked up in a junkyard on the Gowanus Canal.

I came across this little card in an overgrown section of Owl’s Head Park in Bay Ridge, Brooklyn. “Please pardon my intrusion, but I am a DEAF-MUTE trying to earn a decent living. Would you help me by buying one of these cards.”

The quarantine hospital at North Brother Island has fewer artifacts than you might expect, but a maintenance building still held a nicely organized matrix of keys. I pocketed a handful of them, unable to resist their attractive sea foam patina. They’re pictured here with a raccoon bone, raccoons are the only mammals present on the island. 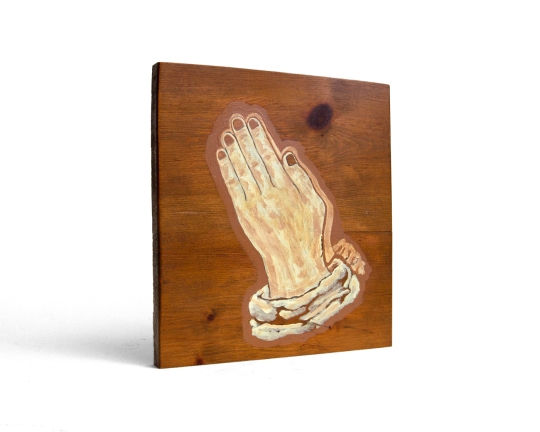 I spent several summers teaching animation and filmmaking to kids and teenagers in a repurposed chapel on Governors Island. A few years back, we had to vacate our beloved space when the building was slated for demolition, but I salvaged this hand-painted sign above the donation box on my way out. As far as I know, the Our Lady Star of the Sea Chapel is still standing, filled with old animation sets and crude clay characters from three summers ago.

This photo was taped up in a bedroom of the Batcave squat in Gowanus, Brooklyn. The building’s inhabitants were evicted in the early aughts, but many of their belongings remained until recently—the structure is currently being renovated into artist studios. From what I can tell, the photo depicts the entrance to the Batcave, taken from the inside. It might not look like much, but the abandoned power station was home sweet home to many.

The fanciful Samuel R. Smith Infirmary was one of Staten Island’s greatest architectural treasures until the hospital met the wrecking ball in the spring of 2012. I found this old chair leg while touring the structure only a month or two before its demolition.

This wormeaten music book was left behind in a book room of P.S. 186 in Harlem that I didn’t notice until my second visit. Supposedly, the long-abandoned school is being renovated into affordable housing and a Boys and Girls Club.

The pristine stretch of wilderness at Four Sparrow Marsh is concealed by a thick barrier of trees and overgrowth dotted with homeless encampments. Some spots are still occupied, but the individual who left this button behind was long gone. I found it pinned to his winter coat.

Beautiful ceramic mosaics are the most striking feature of the abandoned Sea View Hospital complex on Staten Island, located just across the street from the New York City Farm Colony.  These seashells are used as design motif throughout the building.

The warehouse at 160 Imlay St. is currently being renovated to luxury condominiums, but back in February of 2012, it was free to explore. This was the building that started it all for me; I walked in on a whim, and from then on, I was hooked. This rusty fire nozzle has sat on my mantle ever since.

The eerie office at Machpelah Cemetery was neglected for decades before its demolition earlier this year. The place was pretty thoroughly ransacked when I visited, but I did find this coin bank in the back of a safe deposit vault. The bank itself is a souvenir from the 1939 New York World’s Fair, but the pennies inside date to the 1960s, 70s, and 80s. A coin minted in 1989 was the most recent addition, and likely coincides with the last year the building was occupied.

Waterlogged family photos were a tragic and ubiquitous sight in the aftermath of Hurricane Sandy. This was found several months after the disaster in a storm-ravaged park at Cedar Grove Beach, Staten Island.

This tiny plastic shoe was found washed up on Dead Horse Bay in south Brooklyn, one of the best places in the city to find old things. The marshy area was filled in with garbage in the 1920s, but at some point, the landfill cap ruptured.  Today, the shore is covered with old glass bottles and early plastic toys.

Another find from Dead Horse Bay.  These “Lucky Joe” banks were manufactured by Nash’s Prepared Mustard in the 20s and 30s to celebrate the boxer Joe Louis.  The container included a slotted lid that converted the jar to a coin bank once the contents were used up.

No bag of souvenirs from Dead Horse Bay is complete without a few horse bones. These are fairly commonplace and may date back far earlier than most of the garbage.  They’re remnants of the area’s industrial age, when dead horses and offal were processed into glue and fertilizer.