It’s been a while. I hope everyone out there is taking care, slowing down, and staying healthy. A lot has changed since I was actively exploring abandoned places in New York City. The Domino Sugar Refinery is now a popular park and mega-development, Harlem’s P.S. 186 is a charming apartment building, Creedmoor’s “Building 25” is… well, still a pigeon-infested nightmare factory as far as I know.

But now at the time of this writing, the city itself feels abandoned. It’s not hyperbole to say that New York will never be the same, because it’s never stayed the same. But exactly how this latest chapter will transform it remains to be seen, and we live with that uncertainty.

It’s left me, a non-essential architectural photographer, stuck at home in Brooklyn without the ability to work, but a sudden wealth of time to explore the sort of interests that led to the creation of this blog eight years ago. I’ve decided to share what I’ve been up to here. I think those of you who enjoy the darker side of history might appreciate it.

Many of us have taken comfort in apocalyptic novels and movies as a way of feeling more acutely the vague, omnipresent terrors of the moment. I’ve made my own contribution with The Great Disaster, using photo collage as a medium. Each of these images combine a dozen or more antique photographs, namely real photo postcards of the early 20th century, for which fires, floods, and local calamities were common subjects.

Real photo postcards were introduced by Kodak in 1903, allowing amateur photographers to print images directly onto pre-made postcard backs and share with far-flung friends and relatives. A century before Instagram, the notion proved irresistible and the format grew to dominate the photo industry. General stores across the country were stocked with postcards of local landmarks and events, and disasters were a major category.

Drawn to the eerie atmosphere of these early photographic artifacts, I collected over 150 examples. After digitizing the materials, I combined their most evocative subjects into the compositions you see here, presented in the style of their source material. The pictures chronicle the aftermath of a catastrophic fire in an unnamed American city, weaving together dozens of disparate, often unidentified events into a single narrative. Descriptive text is drawn from original hand-lettering found on the cards, incorporating headlines from the days after the Great Chicago Fire of 1871 and the 1906 San Francisco Earthquake. 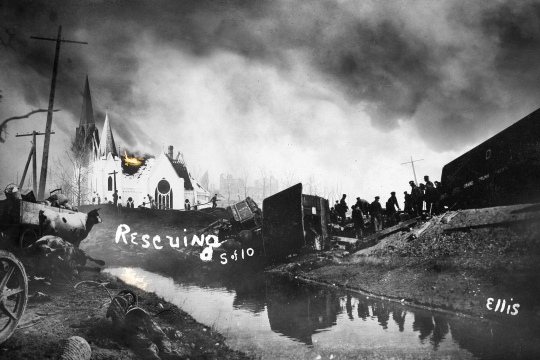 Conceived as wildfires ravaged California and Australia and created from lockdown in New York City at the height of the COVID-19 pandemic, the series reflects on the human fascination with disasters at a time when these events take on unprecedented scale and regularity. While indulging in the curious appeal of catastrophe, the pictures illustrate the cyclic nature of any trauma, both the personal and collective, with their familiar rhythm of chaos, reflection, and renewal.

As part of this project, I’ve created a set of physical postcards which are available on my (other) website, with antique-style postcard backs. I’ll be donating half of the proceeds to Americares, a disaster relief organization working to respond to the pandemic.

Thanks for your support and stay safe out there.