The ruins of Long Island’s Kings Park Psychiatric Center are often described as the perfect setting for a horror movie, and sure enough, several have been shot here. Poe and Lovecraft’s narrators may have been writing from asylum cells, but today’s horror heroes are venturing inside the abandoned ones. As shuttered institutions across the United States fall into decay, the insane asylum is showing up with increasing regularity in our scary movies, TV shows, books, and urban legends, quickly becoming synonymous with vengeful spirits, villainous doctors, and murderous mental patients. But while we may enjoy the “thrill of the shudder” while looking back at these places, we should be wary of reinforcing the stigma of mental illness and overlooking the nuanced history of American institutions.

A craft room on the ground floor still held looms and half finished rugs. (Prints Available)

Established in 1885 by the city of Brooklyn prior to the consolidation of the five boroughs, Kings County Asylum followed the farm colony model popular at the time, designed as a self-sufficient community where residents were put to work raising crops and livestock to support the sprawling campus. The labor was thought to be therapeutic, occupying the time and attention of residents and keeping costs down. Early in its history, Kings Park was composed of a group of cottages meant to avoid the high rise asylum model which was already viewed as inhumane. But demand soared as the population skyrocketed in New York City into the 1930s, and in 1939 the institution resorted to constructing Building 93, a 13-story structure whose design was strikingly similar to what it had sought to avoid. At its peak in the 1950s, Kings Park reached a population of over 9,000 residents, who were divided by gender, age, temperament, and physical limitations through a complex of over 100 buildings, which included power plants, fire stations, staff housing, hospitals, recreational facilities, piggeries, and cow barns.

Beds may have been moved down in 1996 when Kings Park’s last residents were relocated to nearby Pilgrim State.

Furniture and equipment left behind on the ground floor.

Throughout its history, Kings Park was notable for staying on the cutting edge of psychological science, cementing its place in history as an early adopter and proponent of a succession of new procedures and medications that eventually led to the institution’s decline. In the first half of the 20th century, the psychological community was in a state of desperation, charged with the task of caring for a growing number of mentally ill patients with few treatment options available aside from psychotherapy and the rampant use of restraints and confinement. The 1940s saw the rise of two groundbreaking, albeit crude, procedures that gave doctors effective tools to manage extremely disturbed patients for the first time.

Shock therapy was conceived when doctors observed that the mood of epileptic patients suffering from depression improved after a seizure. The procedure aimed to replicate these benefits by inducing a seizure through electricity or insulin injection. Electroconvulsive therapy, as it’s known today, is still considered an effective treatment, even having a resurgence in recent years.  But today’s advanced anesthesia and precise control of the duration and physical effects of seizures is a far cry from what patients went through in the 1940s.  Strapped fully conscious to a hospital bed, patients could convulse for up to fifteen minutes at a time, often with enough force to fracture and break bones.  Once a patient was admitted to an asylum, they had no right to give or deny consent for these procedures, and in many cases, shock therapy was used as a punitive measure to keep unruly residents in line.

Early diagram of a transorbital lobotomy.

The lobotomy is remembered as one of the most grotesque treatment methods of the era. It was a simple procedure, in which a metal tool was inserted through the eye socket into the skull cavity, and wrenched around to sever the connections of the pre-frontal cortex from the rest of the brain.  It was an imprecise and brutal operation, which left lobotomized individuals with no trace of their former selves. Though proponents of the procedure called these results a “second childhood,” lobotomized patients might have been more accurately described as zombies—extremely violent and disturbed residents would be rendered permanently docile, passive, and easy to control. Though it was controversial even in its time, its first proponents were awarded a Nobel Peace Prize in 1949 for their discovery. 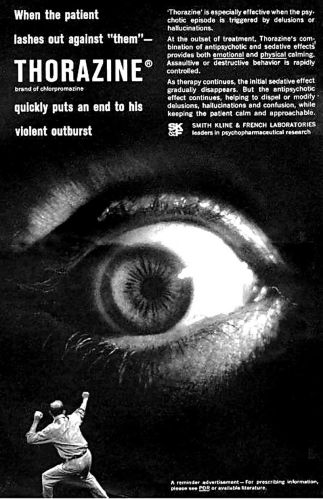 A 1960s advertisement for antipsychotic medication.

The development of effective antipsychotic medication in the mid-1950s signaled the decline of these extreme measures and the institution system as a whole. For the first time, residents once considered hopeless were able to manage their mental illness and live independently. This led to a dramatic shift in institutions across the country from severe overcrowding to near-abandonment as a trend of deinstitutionalization swept through America into the 80s and 90s. But as anxious as the powers that be were to put this dark period of history behind them (and cut funding out of state budgets,) they may have done too much too soon. While medication has made it possible for most people living with severe mental disorders to function on their own, there is still a sizable percentage for whom the available medications are ineffective. Reputable group homes for the mentally ill are few and far between, and out of reach for individuals without a solid support system in place. Many suffering from severe mental illness today are living on the streets, and a growing number end up incarcerated, without proper access to quality psychiatric care. Today, Kings Park stands as a testament to a bygone era, but the problem it sought to address remains unsolved.

Layers of colored paint peel from a hallway of isolation rooms. (Prints Available) 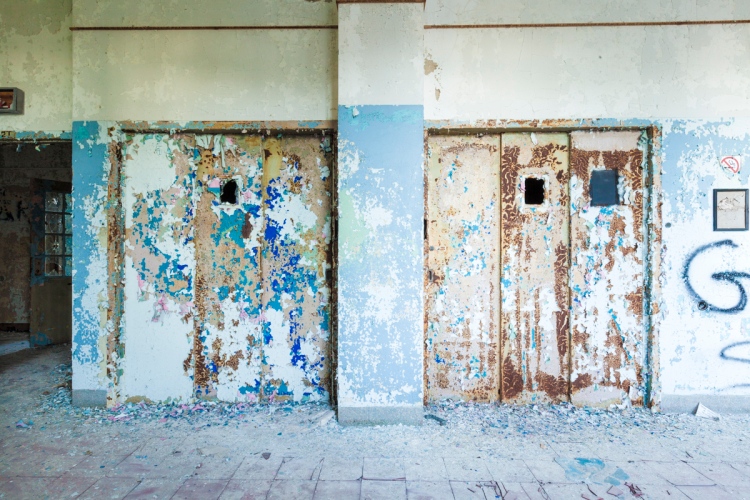 Lower floors housed able-bodied residents with large day rooms, while the infirm were confined to the upper levels. 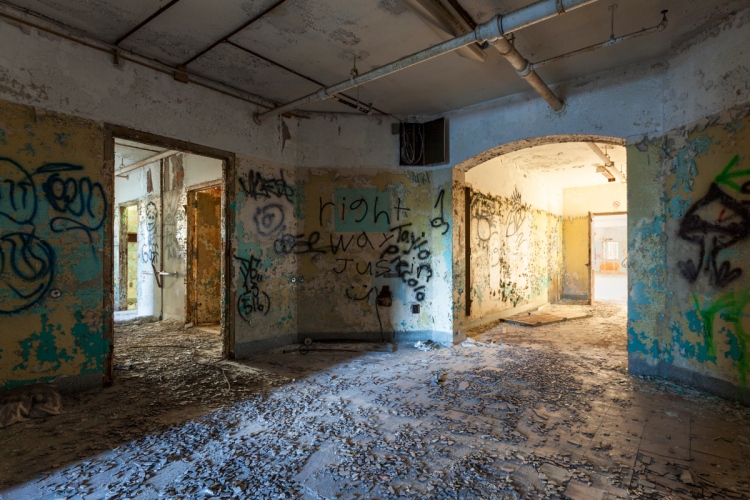 Each floor was nearly identical, with subtle variations in color and layout.

Patient rooms leading to the cafeteria. 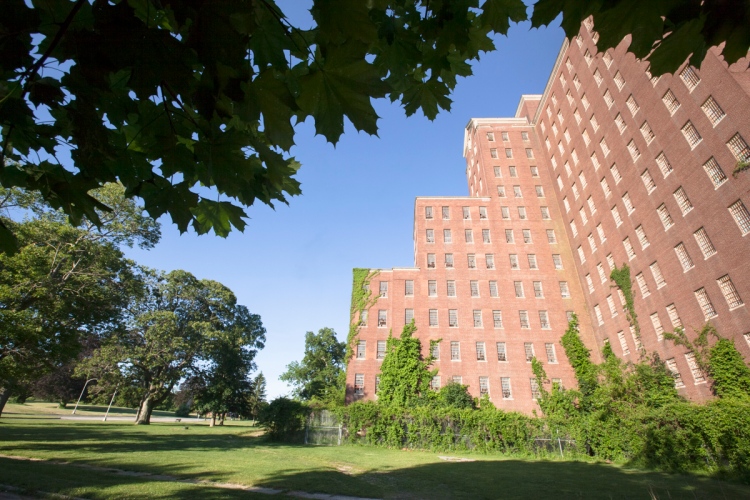 Vines overtaking the exterior of Building 93.

Check out Part 1 of “A History Abandoned” from Vocativ.com, which follows me on an exploration through three NYC institutions.  First up, Kings Park: 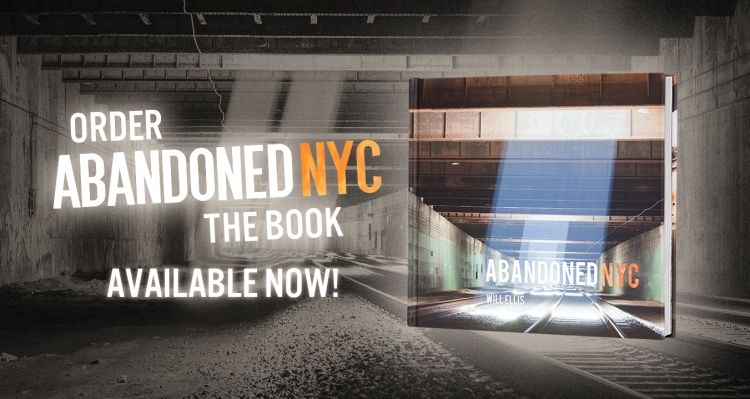